Day Two at XRIJF ... Yes, Debussy and Ravel can swing 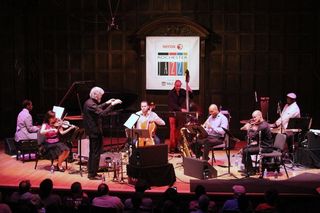 Getting to Jazz Street a bit early on Saturday, I avoided the alley and got to watch the crowds grow while I waited to get into Kilbourn Hall for Tom Harrell and his Debussy/Ravel project. The wait was worth it as I joined a full Kilbourn Hall in hearing Harrell's beautifully-crafted jazz arrangements of those masters' pieces, often making them swing, but always making them into complex and satisfying music. The band played well past time for closing it down, but its audience was transfixed and it seemed that few were leaving their seats to get to their next gig. Something special was happening on stage and they knew it. One thing I noticed (and have noticed in the past with Harrell's work, including his albums) is that while he does takes a beautiful solos here and there, he really creates many spaces in his arrangements and compositions for the mates in his band time to shine.  And what a band it was, including Wayne Escoffery on saxophone (who took some incredible solos), Danny Grissett on piano, Ugonna Okegwo on bass, Meg Okura on violin, Rubin Kodheli on cello, Eastman faculty member Charles Pillow on flute (and I believe a bass flute for one piece), and drummer Johnathan Blake (who brought down the house with a wild solo). 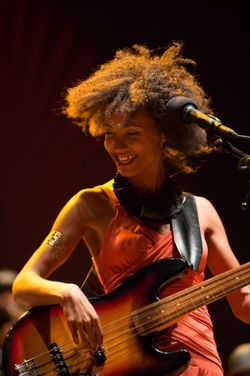 After Harrell, I dropped in to catch some of Esperanza Spalding's first set and see her in this new context of Best New Artist Grammy winner and playing in the "Big House" of Eastman (when she came here before breaking out we had hit both of her sets at Max). Spalding had a large and talented band with her, including Tia Fuller on saxophone who repeatedly blew some amazing solos while I was there. Although in a much bigger venue and much bigger production, she still seemed to be making (or at least struggling mightily) a personal connection with her audience. Part of me wanted to stay for the rest, but I had more music to hear....

I walked around a bit and caught some of the Sultans of Swing in the Big Tent and then weaved my way through the crowds to Montage for Mathias Eick. Due to continuing issues with flying through NYC and Newark, NJ, Norwegian Mathias Eick and his band were not able to get to Rochester in time for their 6:00 pm show at the Montage. However, the Swedes came to the rescue and Goran Kafjes and the Subtropic Arkestra stayed to fill in that show and I hear invited those in line into the Montage for a "prequel" concert during their soundcheck. 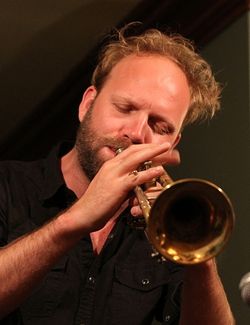 Mathias Eick and his bandmates did arrive in time for the 10:00 pm, jet-lagged after 2 days of traveling, but energized that they were starting a 1 week tour in the US. They put on a high energy set, with Eick on trumpet and his piano/keyboard player Andreas Ulvo laying intricate melodies with their instruments and effects while bassist Torstein Lofthus and the two drummers (yes, two drummers) Audun Erlien and Gard Nilssen keeping a thunderous beat. The music was often hard-driving, rock-oriented, but it was great the audience roared its approval. I did a double take on the two drumsets not having had a chance to check out Eick, thinking that they just hadn't taken down the kit used by Goran Kafje's group. The use of two drummers worked. They created a much more complex rhythmic background to the atmospherics of Eick and Ulvo. The set was high energy despite their long journey; they were definitely not running on fumes.