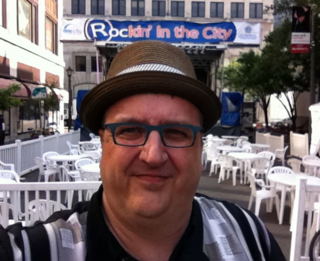 I have a confession to make here. I had this grand plan (even wrote it out) about how I was going to get through a bunch of posts for individual artist picks through the last few weeks before the XRIJF began. While I like how they've turned out so far, the production output has been "not so much."  Even today, despite having taken the day off to do some more pick posts, I made the mistake of checking my work email and had to do some final work on a project that I thought I finished yesterday before turning to Jazz@Rochester and preparing for the beginning of the festival (I'm heading out of here in just a couple of hours to head downtown). My approach this year was way too optimistic given my current workload of getting enough of my pick posts out before the XRIJF started.  I'll still get some more picks out while the festival is going on, but my focus is changing to enjoying the festival with my friends and the rest of you. I'll focus on my "must sees".

Although I've received some great feedback on my new approach, I'm sure you all won't be too worried about getting my "picks". You can make your own choices. My posts were focused on providing you links to more information upon which to make that decision. They are based in part on my very eclectic tastes in music and in part on knowing some of the "must sees" from following the national and international jazz scenes.  This blog is a labor of love of the music and live music in general. As the XRIJF begins I want to really focus it on what's happening in front of me at the festival.  Much of it may be on Twitter or elsewhere. I'm kind of flying by the seat of my pants this year (which can lead to problems as one of my profs in college told me about a paper that exhibited a similar attitude "if you fly by the seat of your pants, at least turn around and look once in awhile).

Tonight I'm starting out with Christian McBride and Inside Straight at Kilbourn Hall (just like old times...), then I'm hitting Goran Kafjes and the Subtropic Arkestra at the Reformation Lutheran Church. Rest of the evening is up for grabs. May go see Get The Blessing, Karrin Allyson, or perhaps even join some friends I know are going to see L'Orkestre Des Pas Perdues.  Say hi if you see my on Jazz Street or elsewhere at the XRIJF.