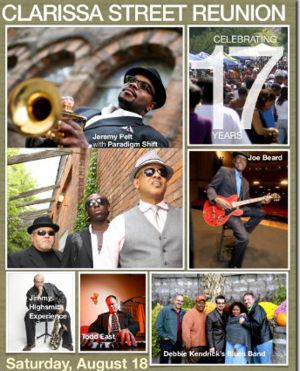 Trumpeter Jeremy Pelt, who was here in November last year playing the Exodus to Jazz series (and showed up afterhours for a cigar and some jamming at Havana Moes), will be playing with Paradigm Shift to headline the jazz stage at the 17th Clarissa Street Reunion.

The original Clarissa Street was on the edge of the the Corn Hill area and extended into the 19th Ward. By the mid-20th century, Clarissa had become a main commercial district of the primarily African-American Third Ward. Businesses included the Gibson Hotel, Latimer's Funeral Home, Ray's Barbershop, Scotty's Pool Hall, Smitty's Birdland, LaRue's Restaurant, and Vallot's Tavern. As it grew, Clarissa became famous for jazz clubs like Pythodd Club, the Elk's Club, and Dan's Restaurant and Grill.(Hat tip: RocWiki). Urban renewal in the 1960s and 1970s wiped away most of that. Every August people who lived in the neighborhood and others invite Rochester to come to a reunion with them on Clarissa Street to celebrate the place it used to be. As the Clarissa Street Reunion organization puts it on the Clarissa Street website (great to see a website, which has much more information):

Live music is the main draw, but you'll also find a parade and other typical festival fare. The Festival is one of a few that are free in Rochester, NY. All you have to do is show up with an appetite for some great American BBQ, an ear for music and you're sure to have a great time.

The full lineup at the Jazz Stage will be located at Clarissa & Troup streets:

At the Blues & Rhythm & Blues stage at Clarissa & McCree Way (Bronson Avenue), the lineup will include: