About Contact Us Join Our Email List ROC Jazz Artists Info for Musicians & Venues Livestreams
Jazz Around Town: Not a jazz VIP, but I play one on the Internet
Jazz Around Town: What jazz are you going out to hear? It's a trifecta for me this week...

Kicking off the exciting and diverse 2012-2013 lineup of the Exodus to Jazz concert series is trumpeter Wallace Roney with his septet on Saturday, September 8th at the Lutheran Church of the Reformation at 8:00 pm (see the 411 below for more details or the Exodus to Jazz website). 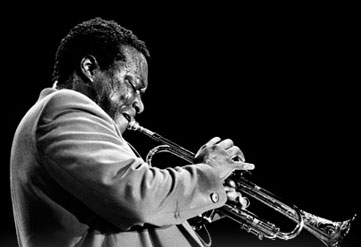 After graduating from Berklee College of Music, Wallace Roney learned much of his craft directly Miles Davis, studying with him from 1985 through his death in 1991. Roney is capable of a perfect imitation of Davis, fooling seasoned jazz listeners andcritics have taken him sounding too similar. However, Roney has his own sound and relationship with the music. As critic Ron Wynn wrote in Rovi, "[Roney's] trumpet tone, timbre, approach, phrasing, and sound so closely mirror that of Miles Davis in his pre-jazz/rock phase that he's been savaged in many places for being a clone and unrepentant imitator... It's a classic no-win situation; he does sound tremendously like Davis and can't be completely absolved from critical charges of imitation. But he's also a fine, evocative player on ballads and can be fiery and explosive on up-tempo tunes."  His albums are fully within the hard bop/post-bop tradition, but he mixes a lot of other influences in as well.  Now recording for the HighNote label, Roney's most recent CD is Home

Found a few videos for you to check out, including a short documentary with Dr. Billy Taylor discussing Roney, Roney with some students in May of this year, one from 1994 Warsaw concert with his quintet (including Roney's younger brother Antoine and now ex-wife pianist Geri Allen), and another from the Miles tribute band's tour in 1996: