About Contact Us ROC Jazz Artist Sites Info for Musicians & Venues Buy a T-Shirt!
Jazz Around Town: Could XRIJF really be around the corner? ... Oh yes it could!
Jazz Around Town: Celebrating live music and live jazz for nearly 7 years doesn't compare to 25, but it's a start.... Starting this Sunday, Tom Kohn, Bop Arts and the Bop Shop are celebrating a major milestone. Twenty-five years ago, Kohn and the Bop Shop hosted its first jazz concert. The band was the Pierre Dorge Quartet featuring Morton Carlson, Irene Becker and a relatively unknown drummer named Hamid Drake, and played in a little hallway behind the Bop Shop. Tom has gone on to produce more than 400 concerts, including bringing many jazz artists and groups whose creative music otherwise would not have been heard in Rochester.

The celebration will, of course, be through more music. Festivities will begin on April 7th at the Lovin Cup in Henrietta near the campus of RIT  and end there on April 9th, with a stop at the store in between. Here's the lineup:

Tickets for each of these shows are $12 in advance & $15 at the door, a special $30 pass for all 3 shows is available. Tickets are on sale at both Lovin Cup and the Bop Shop for the Lovin Cup events; for the 8th, tickets are available at the store. 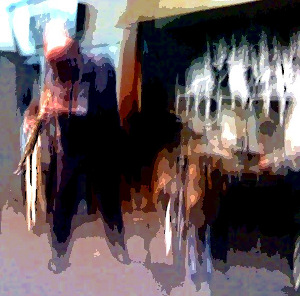 For those of us like yours truly who try to be explorers in the world of music, the jazz and other music presented by Tom Kohn and Bop Arts is creative and challenging, in a good way, providing a refreshing alternative to more commercially "safe" sounds in jazz and other genres. I asked Tom Kohn "What drives you to present the types of jazz you present?" His response is telling and knowing the wide range of music that Tom listens to and raves about, made perfect sense to me:

I like all kinds of jazz music, I need the music to talk to me, to stimulate me like a good meal. I like interesting food as well as comfort food. And then I want to share it with everybody.

And good meals they have been .... I asked Kohn for the five standout concerts (or, I guess, "meals") for him during the 25 years of concerts he has presented: 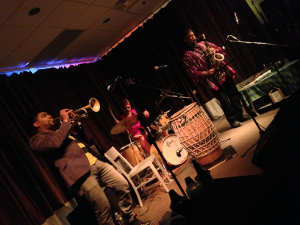 As I hope you all know, Tom and the Bop Shop left their longtime home at the Village Gate and moved to a new space at 1460 Monroe Ave in Rochester. I asked Kohn "what has changed since your move to the Monroe Street store?" Kohn noted that "in store concerts are more difficult to orchestrate in the store," which is why he has turned to the Lovin’ Cup for some of the shows, but he does "miss the Atrium and the courtyard." And what else is currently in the works? Tom notes that so far he's working on bringing the Barry Altcshul Trio, Larry Oaks of ROVA, Respect Sextet, and Ethnic Heritage Ensemble, and I'm sure much more.

And don't forget Record Store Day at the Bop Shop on April 20th!