About Contact Us ROC Jazz Artist Sites Info for Musicians & Venues JazzRochester Merch
The heat also rises ... Day 2 of XRIJF
Local guitarist lets you in on a little XRIJF secret ...

From the bayou to abstractions on standards... Notes on Day 3 of XRIJF

I haven't ever had a chance to catch Beausoleil (avec or no avec Michael Doucet) before, around here or in Chicago, and really enjoyed this quintessential Cajun band at Harro East early show. Despite loving that music, I was glad to hear the way that they expanded beyond that and brought in other influences and ideas.  Couldn't keep the leg from moving no matter what they were playing (and it wasn't RLS...). The Harro's sound has really stepped up this year (although this is my only show so far, I've heard similar from others).

I joined some friends to go catch the Sneider Brothers at the Little Theatre's XRIJF venue, which is the largest of their theatres at the complex. The band and the venue was a welcome break from the heat and the crowds.  Local guitarist and Eastman faculty member Bob Sneider was joined by his brother John on trumpet, Mike Melito on drums and the great Gary Versace on Hammond B3 (with Mike Teitelbaum sitting in on sax for a number of tunes). The music was straightahead (with a bit of "schwing," a reference to a story about a trip to Germany by John) and well-played and it was so nice sitting in those comfy seats in the dark and cool of Theatre 1.  I think the Little could be a great jazz venue for special shows throughout the year if they can fit them in and it is definitely a great new addition to XRIJF. 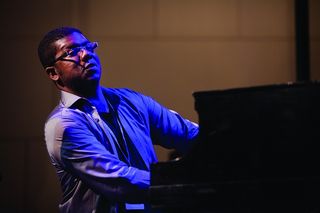 XRIJF Photo of Rafael Zaldivar by Tim Fuss
Sitting in the coolness and , I found myself not motivated to get up early and go to hear Christian Wallumrod Ensemble at the Nordic Jazz Now series in the Lutheran Church (seems that it was a very interesting set for those who waited to hear it all, according to Jeff Spevak at the D&C, although Ron Netsky has a different opinion over at City). After leaving the Little very hungry, I picked up a Brisket Banh Mi sandwich from the BrickNMotor food truck (by the way, the food trucks are a great idea to include in the festival and have provided much more variety of food available without needing more real estate in the fest). Went into the Big Tent to eat it and watch a bit of local salsa band Ritmo Seis while scarfing down the sandwich.

Headed over to Max to get a good seat for Rafael Zaldivar. This Cuban (now Canadian) pianist's music was innovative and more abstract than I expected (which is not a problem as I enjoy it edgy). He played with an intense concentration with his trio mates and his trio mates Rémi-Jean LeBlanc (bass) and Louis-Vincent Hamel (drums). In addition to his own compositions included some great reimagining of standards like What Is This Thing Called Love and Blame It On My Youth. I'd have to agree with some of Ron Netsky's comments, who in the post linked to in the previous paragraph noted that Rafael didn't seem to think too much about how he structured his show at XRIJF, starting out with an 18-minute abstract piece (in reality two) in an hour set.  However, it isn't the first time we've heard longish abstract pieces, although most of the time we're sitting in the pews at the Lutheran Church for those. There is nothing that sours XRIJF audiences than when they feel that the performer is not playing for them, but at them. However, I don't think Zaldivar's audience felt that way and most stayed for the whole set and kept clapping out on the down beat throughout another longish piece, after which Zaldivar announced that he might be replacing his mates (sure....).

Overall a great evening out at the festival.  See you on Jazz Street....