About Contact Us ROC Jazz Artist Sites Info for Musicians & Venues JazzRochester Merch
From the bayou to abstractions on standards... Notes on Day 3 of XRIJF
Only saw two, but they were a good two ... Notes from Day 4 at the Rochester Jazz Festival

Local guitarist lets you in on a little XRIJF secret ...

Sam Nicolosi dropped this over my transom...

Psst! keep it to yourself, but we're meeting in the "Garden" on Wednesday. That's the day, June 26th, during which the two science guys (and acoustic-jazz guitarists), "Ted Nicolosi and Shared Genes" hit the stage behind the Central Library (that's across the street from the Rundel building). High noon, 90 degree temps, situated in the middle of an enormous heat sink comprised of concrete, asphalt and brick: A "Thermodynamic Scenario" for sure. Ladies: permission granted to bring hats! The guitar necks will be expanding causing the strings to go sharp, the coefficient of friction will rise along the frets, linear speed may be affected and power amps will loose efficiency. 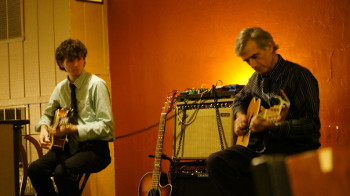 Oh well, that's what goes through the mind of the very first Xerox Product Design Engineer to perform in the "Xerox-RIJF". Yup, sorry to disappoint you, but that's me, Sam Nicolosi, the elder of the duo. In many years of service I have had the privilege to develop mechanical designs and patents for several Xerox products, including the new Xerox iGen Production Printer.

I will be joined by my ace side-man and son, Ted, a guitar virtuoso in his on right. Ted, however, is off in a different science direction, he is a fourth year Biomedical Sciences major at the Rochester Institute of Technology (my alma mater), "premed as they say". So if you have the time and "curiosity', stop out to see us on Wednesday at noon, to see the R.I.T. "science" connection to the Xerox-RIJF. Ladies, remember the hats!

Note from Greg: I would love to have more personal experiences of XRIJF 2013 from the many local artists who are playing. Contact me through the email in the middle panel to get the ball rolling.