About Contact Us ROC Jazz Artist Sites Info for Musicians & Venues JazzRochester Merch
Local guitarist lets you in on a little XRIJF secret ...
Taking my time and floating around... notes from Day 5 of the Rochester jazz festival

Only saw two, but they were a good two ... Notes from Day 4 at the Rochester Jazz Festival

Day 4 I arrived early as my misses for getting my "sweet spot" in the Kilbourn in the first two days of the Xerox Rochester International Jazz Festival were getting tiresome. I thought it might be safe to come after 4:00 pm since it was a weekday, but came at 3:30 anyway.  If I had come at 4:00, I would have just eked into the "sweet spot" on the street before the line turns into the alley between Eastman and Java's. I was in line for the Alfredo Rodriguez Trio. Another of Quincy Jones' protegés (who calls the young Cuba-born pianist "[o]ne of the most prolific and gifted jazz pianists of the 21st century"), I had heard from a number of people, including XRIJF Music Director John Nugent himself, that this was one that couldn't be missed.  He was right.... 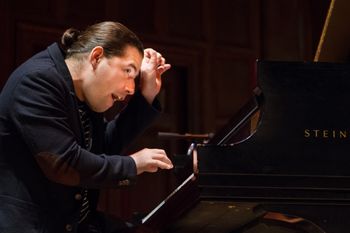 XRIJF Photo by Mark Druziak
Alfredo Rodriguez Trio was the best musical experience I've had so far at the festival, especially as I didn't really know what to expect. It was over 1 hour of intense and ecstatic playing by Rodriguez and his band mates that, when it was over, left me buzzing for quite awhile ... wandering Jazz Street and restoring my bearings. Rodriguez attacks the keys and uses the entire keyboard, hunching over it while driving down each chord and key he plays deep into the Steinway grand. At times he unleashes a torrent of keys, just falling in sheets like a downpour during a thunderstorm. Throughout the concert in Kilbourn Hall, Rodriguez was locked into the pocket created by his band mates (I'm sorry, but I couldn't get their names), who provided inspired rhythmic foundations for Rodriguez's explorations. After playing one of his compositions Silencio, he turned a Cuban jazz standard, Vente Anos inside out and created something new. Next Rodriguez introduced electronics midway through (I didn't catch the name of the tune), but he was not using it in place of his playing, but as another instrument while playing even more intensely on the Steinway. During this piece, Rodriguez incorporated a Peter Frampton-style vox tube and synth to get voice into the electronics, but there was no "Do you feel like I do" here. This put others off, I'm sure, but I just saw it as another instrument and voice ... trying something new. Not that one was needed in this intense, thoroughly satisfying performance.... The trio finished with Guantanamera, but of course it was not your (grand)mother's Guantanamera.

After the Cuban music, I had a powerful urge to have a cigar. I heard a bit of the CNY Orchestra and then moved went to Havana Moes to indulge that urge and continue to calm down. Then I went over to Montage to get in line early for Eric Alexander with Harold Mabern, which was another "must see" for me. One of the best tenor saxophonists out there and hailing from Illinois and Chicago (my former home town), Eric Alexander, with his teacher and mentor Harold Mabern, kicked off the second set at the (now again air-conditioned) Montage with a scorcher by Mabern. Although they played a few ballads to let themselves and the audience get a breather, the band was burning all the rest of the time with Alexander drenching us in his rich, soulful sax and Mabern playing big, aggressive chords and lightning fast romps on the keys. Mabern was a hoot. After a exposition on the intelligence of jazz musicians, he decided to sing a down and dirty blues number. John Farnsworth had several drum solos during the set that left the audience hooting and clapping, even half way before it was over.

So, while I missed a third, I gained two very special musical experiences... not unusual at XRIJF and, I think, I'll take it... See you on Jazz Street.