About Contact Us ROC Jazz Artist Sites Info for Musicians & Venues JazzRochester Merch
Jazz Around Town: There is live jazz out there in Rochester beyond "Jazz Street"...
Notes from Day 7 of the Rochester Jazz Festival ... The new normal and finding a way to hear more

From chanteuse to organ grinding ... Notes from Day 6 of the XRIJF 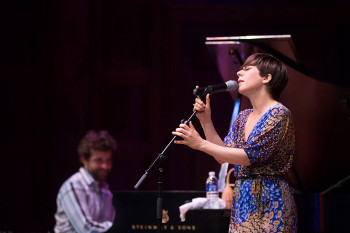 My day started out familiar enough ... in line at Kilbourn Hall.  Good thing I got under the large awning facing "Jazz Street" as the skys opened up for a short downpour. I was in line to hear vocalist Gretchen Parlato. I had heard some of her CDs and had heard that other jazz musicians really dug her (which is not always the case with vocalists...), so jumped at an opportunity to hear her live in the great acoustical space that is Kilbourn. That concert hall was perfect for her as her singing is subtlety personified. She breathes the lyrics with a quiet power that carried her voice above her killer trio (Taylor Eigsti on piano, Burniss Earl Travis on bass, and Mark Guiliana on drums), but didn't overshadow them, making her voice just another instrument interweaving with the others. Moving from 1990s band Simply Red's Holding Back the Years, Herbie Hancock's Butterfly, and Wayne Shorter's JuJu, through more of a samba where all were playing percussion and Parlato was filling in the Brazilian drum head rubbing sound and standing there with two percussion instruments involving balls and string that reminded me of the old "Clackers" toy, which was long ago banned. Of course there were more in in her set of 9 songs in the over an hour she was on stage, but that's all I got written down as I began to "lean forward to listen" as Jeff Spevak noted in his review the D&C.

Leaving Kilbourn Hall after 7pm, I was again faced with a Montage 10pm show, which makes choices in the "middle" of the evening.  I found myself with numerous choices in the Clubs and on the street. I went to Christ Church as I thought I could catch some of Soweto Kinch's early set rather than the unlikely prospect of catching part of his 9:00 pm set. Kinch was on my picks as I enjoyed him so much when he was here in 2011, but came in toward the end of his shortened set, catching a beautifuly played piece followed by a freestyle rap based on audience-suggested words. He ended the shortened set by rapping out his URL. I couldn't hit his later performance due to my 10pm "line duties" at Montage. But I have my memories from 2011 ...

After Soweto Kinch finished his set, I floated around hearing some Djabe on the Jazz St. Stage and some of local Jimmie Highsmith Jr. at the LeDestri/RGE Spirit stages before heading over to get into line at the Montage for the organ trio composed of three veteran top-drawer jazz players—Larry Goldings holding down on the Hammond B3 organ, Bill Stewart innovating in the pocket on drums, and the consumate guitar work of Peter Bernstein. Having them play together in Rochester (where Goldings and Bernstein met in their teens in 1984 at an Eastman Summer Jazz "camp") was special as I get the feeling they don't venture out together, so I didn't want to miss their set. They were tight and seem to have a natural ability to lock in to each other's playing that probably comes with years of playing together in NYC at the legendary Village club Smalls. Goldings has a more subtle and inventive style to playing the B3 than others, coaxing and sometimes grinding out different sounds from the B3 than one hears traditionally, which was an extra treat. People walked out of the Montage with big smiles on their faces as they knew they had just heard something that happened only that night and could take that home with them.