Notes from Day 7 of the Rochester Jazz Festival ... The new normal and finding a way to hear more

As I've reported here in my other Notes posts, there is a "new normal" in the lines that causes some difficulty for us jazzheads who are trying to hear and soak up as much of the music of this festival as possible. Necessary changes to the number of festivalgoers that are allowed inside of the Montage have made getting to that line early more important if you want to be in that intimate setting with the world class acts that tend to play there (by the way, those changes were the result of negotiations with the City's fire marshal and were for patron safety reasons). My "sweet spot" for Kilbourn has eluded me more often than not this year and while if you're in a line all the way to East Ave., you're likely to get in, I have reasons for wanting to get in line early).  If I have "must sees" in both Kilbourn and the Montage (which is sometimes the case, given my musical tastes), my new normal is that I'm going to have to make some hard choices in the middle between the 6 and 10 pm shows. In the end, I may only go to two shows, which in the past was unheard of during the 9 evenings of the Rochester Jazz Festival.  But as I'm saying, that appears to be the new normal (hat tip to Bob [not John],, who runs the Montage venue for that phrasing....) and I'm willing to live with it. When I'm only going to Kilbourn OR Montage in an evening, then a whole lot else opens up. That's what happened on my Day 7.

I was in line for Ravi Coltrane by 4:00 pm, having spent about an hour hanging at Havana Moe's and then thinking "perhaps I should head over to see how the line's doing". When I came around the corner, I saw that it was indeed, by 4:00 pm, nearly 1/3 of the way down the Alley by Java's.  By 4:30 it was on Swan Street. After dutifully (and with the help of some liquid refreshment) whiling away the 1.5 hours in line, I got in my "sweet spot" row and sat down. Ravi Coltrane was joined by the killer lineup of guitarist Adam Rogers, drummer Johnathan Blake (in one more of several appearances at the fest), and bassist Dezron Douglas. Launching into Ravi's composition 13th Floor, which rose up until it boiled over, the group also played a Bird tune Segment, One Wheeler Will by Ralph Alessi that was written for Ravi Coltrane's son, and a new tune The Change off Coltrane's new CD on Blue Note Spirit Fiction (affiliate link

). That's at least what I got down in my notes. I should be forgiven my memory lapse as I was transfixed. Coltrane's playing was intense and full of unexpected and lightening fast changes that were deeply satisfying.

Since there was no Montage in my planned evening, I hoofed over to the Lutheran Church to catch Jacob Karlzon 3. Before playing, Karlzon announced that was the first leg of a now much reduced US tour (then saying that the last leg was the second set at 9:30 pm). This was another power piano trio which we've seen before at XRIJF (even in this year's fest), but they were exceptional and I really enjoyed the driving beat and groove of the first one "Running". However, shortly after the second or third piece, I felt the wanderlust tugging at me and pulled up stakes to head out into the threatening skies for something else. 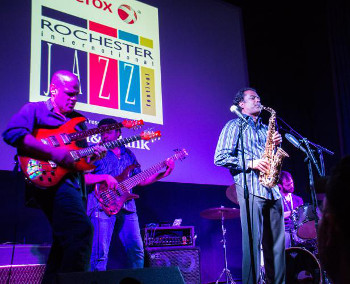 XRIJF Image: Photo by Marcie Ver Ploeg
Again with the lines determining actions. I had heard from a number of people that the line at the first set by Rudresh Mahanthappa’s GAMAK project had been long and I would need to get there early. I got over to the Little Theatre by 8:00 or so, a full hour before the set was scheduled to start.  While the Little would fill up before 9:15, I ended up first in line (and I wasn't trying to get up front). This was one of the shows I didn't want to miss at this year's XRIJF.  Mahanthappa is touring for his new album of the same name

(affiliate link) with Screaming Headless Torsos guitarist David "Fuze" Fiuczynski, drummer Dan Weiss and, in this outing, bassist Rich Brown. I really enjoy arists like Mahanthappa who fuse jazz with the traditional music of India and music of other peoples from around the world.  The music was raw and uncompromising, with torrents of notes coming out of Mahanthappa's alto saxophone and Fiuczynski's double-necked guitar. There were little escape from the searing heat and attack of the playing, with one notable exception being Slendro, which refers to a scale in Javanese gamelan music.  Another Indian-American artist (Rudresh is second generation in the US) is Vijay Iyer who grew up around here and drew me down this path of music discovery when I heard him at Max at a RIJF years ago (an aside, Vijay's parents were sitting behind me in the Little last night). The second set was killing and that would have been enough to just pack it up and go home, but....

I went to Max to see if I could get in and hear some of Carmen Souza's 10pm set. As I walked in, she was singing Soldade, a well known song that I love on my CD of legendary Cape Verde singer Cesaria Evoria, which then morphed into My Favorite Things and finished up with a chant. Souza was a delight. She sings in a distinctive style that worked up and down the scale from gutteral lows to falsetto highs (sometimes all in the same phrase). She had an easy banter with the audience, who was just eating her up. I left Max thoroughly satisfied by the broad smorgasbord of music I had just consumed and ran out into the rain.

Hey Greg, speaking of the new normal... what's with people talking in concert venues? I was in the cheap seats at Kodak Hall for the James/Sanborn/Gadd show and at least three couples found the need to say STUPID things ***during the music***. I have no problem with people reacting to the music, per se, but this was just too much. Talk in between pieces, fine. On the street, talk all you want, I'll wander somewhere else. In a club, drinking, sure talk at Your Table a little.

Honestly, what could people possible say that was better or more important than the performance? (Which was Great) These were middle-age types, who should know better. Let the musicians talk/play/perform.

These 'jazzholes' seemed to know a little about music, which makes it all the worse. Dude, David Sanborn can't hear you and don't care if you think he's really killin' it.

You can't talk and hear at the same time... Sorry, rant off. Greg, glad you're having a good festival. What did you think of the Little as a venue?