About Contact Us Join Our Email List ROC Jazz Artists Info for Musicians & Venues Livestreams
One day of XRIJF down, 8 to go... Notes from the festival
From the bayou to abstractions on standards... Notes on Day 3 of XRIJF

As the heat rises outside, the heat generated by all these people and great music continues to rise as well. Here's some notes on my second evening at the Xerox Rochester International Jazz Festival. I missed the "sweet spot" again to get in line for Dr. Lonnie Smith Trio, but this time remained in line and had a great time listening to the good Doctor hit a groove early and he and his killer trio of the two Jo(h)nathans (they spell it differently, I think) with Jonathan Kreisberg on guitar and Johnathan Blake on drums kept it in the pocket well past the 7:00 stopping time. I love watching him play the Hammond B3 as his face often shows the emotion that the sounds he's creating out of that B3 are trying to evoke. He was having some fun playing with some sampled instruments and sounds, including percussion, strings, film noir sounding music, etc. and working it into the groove. 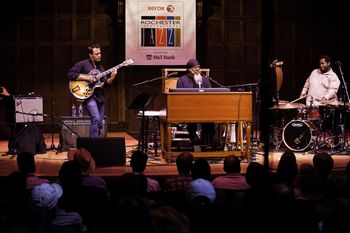 I floated around for awhile, listening to some of Robin McKelle and others who were playing free concerts.  I took a side trip into the Rochetester Contemporary Art Center to finally check out their 6X6X2013 sale. They're trying to sell 2,000 6x6 inch art works that have been created by artists and other folks. Some great stuff in there. Only a $1 to go in and look around (airconditioned, too).  You'll have to check it out yourself, it's right on East Ave.  I walked out of the gallery and just happened to be at the end of the line for YolanDa Brown, who had got some buzz after her first performance. Longest line I've seen for a Made in the UK series show.  While Ms. Brown's music was not my personal cup o' tea, it was very well played and the capacity audience was clearly eating it up.

I left early (much to the delight of one of the patrons waiting to get into the Christ Church for YolanDa Brown) and headed over to Montage for Terell Stafford Quartet.  As in the past, Terell didn't mess around. He and his young band of former students at Temple University in Philly, where Stafford teaches, just ripped into one piece after another. I was lucky to get in as the Montage venue is being very strict about the number of people allowed into the music room at a time. I was in the last four who got inside. Adds another calculus into when and where you go as lines become more of an issue.

As a friend said they'd be there, I headed over to the after hours at the Rochester Plaza Hotel.  The hotel opened up its bar area into the lobby and that has made the after hours much more enjoyable. There's room to get around even when the playing gets hot with artists coming up to sit in and give Bob Sneider, Dan Vitale and/or Mike Melito a break. After XRIJF Music Director John Nugent came in and hopped on stage to play a number, he drew up Terell Stafford and Mike Cottone (well known to Rochester audiences after playing here during his time at Eastman before moving to NYC). Quite a few artists came up while I was there (and I expect after I left as it usually gets the hottest before last call).

See you on Jazz Street!