About Contact Us Join Our Email List ROC Jazz Artists Info for Musicians & Venues Livestreams
Notes from day 8 of the XRIJF ... There are no notes, just links
Jazz Around Town: It's over, but it's just starting ... jazz around Rochester in the dog days of summer

The song has been sung, another XRIJF ends ... Notes from Day 9 of the Rochester Jazz Festival

It's over. Mordecai Lipschutz has sung the song that traditionally closes the fest. Another XRIJF is over. By the time I found my way to the East End for the last night of the Xerox Rochester International Jazz Festival, I had heard enough music from such varied and international sources to fill my head and heart for another year.  Everything on Day 9 was gravy and I just had a couple of spoonfuls although reading some of the other commentary, I wish I had a couple more.

Deciding not to start with Kilbourn Hall (although I love Kurt Elling, I had my quota of singers this year already and have heard him sing over the past 20 years quite a few times). So, a bit later after hanging at Havana Moe's, I started out with pianist Gwilym Simcock in Christ Church. Simcock's compositions and playing invite comparisons to Keith Jarrett and Brad Mehldau among others.  I was sitting close and could see his fingers flying across the keys. While I enjoyed this, I was restless and 9 days of XRIJF had taken enough of a toll that I needed to keep moving. I really enjoyed Jaco & Joe, dedicated to Pastorious, Zawinul and the band Weather Report. 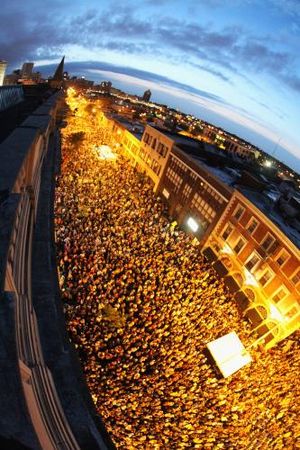 I went out on the street and spent some time just drifting, running into friends and XRIJF acquaintances for impromptu conversations, and just people watching (which is one of my favorite past times at the fest). I waded into the sea of humanity who had gathered to wiggle their bums for Dwyane Dopsie and the Zydeco Hellraisers and then headed out to hear the local band Thunderbody and then Monty Alexander Harlem-Kingston Express (the former being a reggae/groove band and the latter connected to Jamaica). Monty Alexander began his set and it soon became clear that he would be playing a straight up jazz set. As the D&C's Anna Reguero notes Alexander's remarkable set was a "huge chance taken by the festival organizers." Presenting jazz at a "jazz festival" should not be a risky endeavor, but I have to agree with Anna. At one of the big outdoor stages on the last night it represented quite a departure from prior XRIJFs and when I left to head into the Montage for my last Club Pass show of 2013 there was a substantial crowd getting into his music; of course no where near the 10,000 or so folks who were a few blocks down the street for Trombone Shorty.

I ended up at the Montage with another risky endeavor at the XRIJF, music that is on the "out" side by Tim Berne's SnakeOil. While there are other venues where this occurs occasionally—the Nordic Series at Lutheran Church of the Reformation; Montage is another—a lot of the music presented at XRIJF, while from locations beyond the standard and played wonderfully by world-class musicians, is not particularly challenging.  As jazz critic Nate Chinen noted in a review of SnakeOil's release on major label ECM in JazzWise, Berne has "embodied a rough convergence" between pragmatism and skepticism, "casting a cold eye on conventional wisdom while endlessly putting theory into practice." SnakeOil is Berne on alto, joined by band mates Oscar Noriega on bass clarinet and clarinet, Matt Mitchell on piano and Ches Smith on drums, vibes and percussion (including what appeared to be a bag full of cymbals on the floor). The music was demanding and uncompromising for both the musicians and the audience. As someone who keeps pushing the envelopes on the music I hear, I hope that XRIJF continues to keep pushing it with bands like SnakeOil. On each piece (and I think there were only two or three) the band played full out, interweaving with each other in structured forms that provided space for more free form playing. All four musicians were playing amost all the time. Sure there were solos, but they were not alone with the others resting or lightly comping; they just arose out of the playing of the whole, which didn't stop. When Berne announced half an hour into the show that "for our last piece, we're going to play..." we weren't sure whether he was joking. He wasn't... A half hour later, they finished. The audience members who remained in the venue jumped up to applaud. Some in the audience, in sort of XRIJF/Rochester tradition, started chanting for an encore. Berne looked at them quizically and said "Seriously?".  And so my 2013 XRIJF ended....

I may have some more posts to wrap things up later. I shared some of my favorites from this year's fest with Jeff Spevak of the Democrat and Chronicle, who added a bit to his review of the final night of XRIJF (thanks, Jeff!). See you on Jazz Street ... next June.