About Contact Us Join Our Email List ROC Jazz Artists Info for Musicians & Venues Livestreams
Jazz to weather a blizzard with ... the next seven days of live jazz in ROC
The summer jazz looms, but since we still have some winter to go get in and get some jazz ...

Another Jazz in June gets underway... The XRIJF lineup announcement 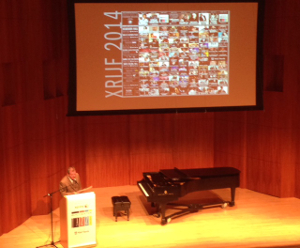 I cannot believe it is already that time again, but this morning I was again sitting in the balcony of Eastman School of Music's beautiful Hatch Hall for this year's press conference announcing the full lineup of Club Pass and outdoor music for this year's Xerox Rochester International Jazz Festival, which will run from June 20th through the 28th. After a round of short speeches by XRIJF producer Marc Iacona who thanked the sponsors, followed by a smattering of sponsor representatives and assorted politicians and representatives of politicians, music director John Nugent hit the stage announced the year's lineup.

There are some real highlights for my eclectic tastes in jazz and music at this year's XRIJF, with some returning and some new sounds to check out, but you'll have to catch my notes on the lineup in later posts (gotta go back to work, man!). Until then, please feel free to check out the XRIJF lineup at their website.

Yahoo! Love the Jazz fest and all the festivals across Rochester in the summer. Makes winters, especially like the one we just had bearable.