About Contact Us ROC Jazz Artist Sites Info for Musicians & Venues JazzRochester Merch
A two-fer mega-post as XRIJF arrives ... what I'll be hearing on June 27th and June 28th
All the picks posts for the 2014 XRIJF in one place.... 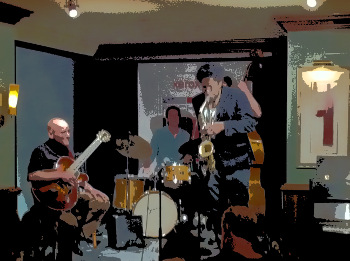 Every night of the Xerox Rochester International Jazz Festival, after the last concert is over and they're packing up the stages for overnight, some XRIJF patrons who are not yet ready to call it quits head over to the Rochester Plaza Hotel where there is an opportunity to watch (and more importantly hear) music "magic" happen, which can be the result when an eclectic and naturally improvisational group of musicians get together, imbibe some beverages and are backed by some consumate professionals.

For 13 years, guitarist and Eastman prof Bob Sneider has emceed and led the festival's nightly jam session at the Rochester Plaza State Street Bar & Grill, which runs each night of the festival from 10:30 pm to 2:30 am. He is usually joined by bass played by Phil Flanigan or Dan Vitale, and drummer Mike Melito. Bob keeps the music flowing until last call, even when the artists are not yet "ready" to join in (Bob lines up a talented set each night of Eastman students and amateurs to let them get some experience playing for an audience, and many of them have some real, if still to be developed chops). Festival producer John Nugent, himself an accomplished jazz saxman, I think has missed sitting in at the jam session only once in 13 straight years.

The artists, almost all of whom are staying at the Rochester Plaza, often hang together, but are generally open to talking with fans. There is always some power networking going on among the artists and other music people there. However, either with or without prodding, some will eventually grab their instrument or give Phil, Dan or Mike a break.  When that happens it is sometimes magic, with several musicians from disparate groups creating great musical moments and have at time brought down the house.

The recent upgrade to the space at the Rochester Plaza Hotel where this all happens has really opened up the space and made it more open and easier to navigate when the crowds get heavy. There is seating and food outside as well (and sometimes video and piped in sound ... won't promise until I've been down myself).

But be forwarned, while there is good music going on right from the start, the "magic" when it comes usually comes after midnight...