About Contact Us Join Our Email List ROC Jazz Artists Info for Musicians & Venues Livestreams
A little mix of XRIJF and the other live jazz in town (Live jazz in ROC, June 25-July 1)
Hymn to the 7th Day of the Rochester International Jazz Festival...

A sweet Suite to Afro-Cuban Jazz... Day 6 at the XRIJF 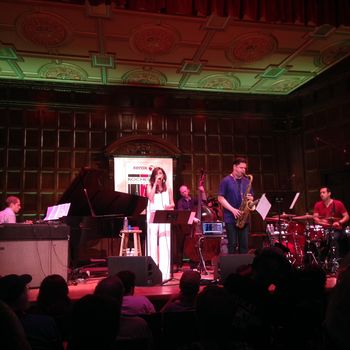 Last night was one of those nights at the Xerox Rochester International Jazz Festival where, for me, it was impossible to see all of the shows that I wanted to check out due to timing. I didn't have a "middle" point between my 6:00 pm and 10:00 pm concerts. All the acts I was hoping to catch were clustered around those times. So between 7:00 and 9:00 pm, I just floated around hearing this and that, and spent some time at Havana Moe's. Good enough for me....

Started out at Jazz Starts Here noontime series with my buddies in Paradigm Shift. Got some sun while I listened to their groove-filled set, which was well-attended in the garden of the Central Library at noon. Headed home after to finish my regular Wednesday post of the live jazz happening outside the XRIJF before heading downtown again for the festival.

First stop was a Kilbourn to hear the Antonio Sanchez Migration group (pictured). They brought Sanchez's new Meridian Suite, the second suite heard in Kilbourn during this year's XRIJF. While I expect that some thought they would be playing something from the soundtrack that Sanchez wrote for the movie Birdman, it was a real treat, alternatively blistering and more interspective, with a vocalist who sang vocalese interacting with saxophonist Seamus Blake and pianist John Escreet.

In between I hung out with some friends at Havana Moes and dropped into the Christ Church's Made in the UK series to catch some of Troyka before heading into the Rochester Club for the Afro-Cuban jazz of Hilario Duran and Ingnacio Berroa. Berroa, who had started playing with Duran back in Cuba when they were fourteen years old, was a monster on the drums and regaled the full-house audience with stories about the origins of the music and playing with Dizzy Gillespie. Great Afro-Cuban arrangements of standards like A Night In Tunisia, which Berroa noted Dizzy had told him he never visited, Monk and others. Berroa, who now lives in New York (Duran calls Toronto home now) noted that it had been something like 35 years since he had appeared here due to how hard it was to get into the U.S. to play and that he'd see us in 2055. I'm hoping that as the U.S. opens up the relationship with Cuba that the XRIJF considers starting an Afro-Cuban series for the festival.