About Contact Us Join Our Email List ROC Jazz Artists Info for Musicians & Venues Livestreams
A sweet Suite to Afro-Cuban Jazz... Day 6 at the XRIJF
From Kurt Rosenwinkel's guitar to feeling the air pulse from Ikebe Shakedown's base, Day 8 of XRIJF was a study in contrasts ....

Hymn to the 7th Day of the Rochester International Jazz Festival... 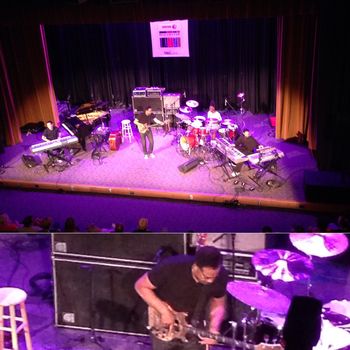 To start out Thursday, Day 7 of the Rochester International Jazz Festival, I caught Dave Douglas High Risk early to make sure I heard this new project for a trumpeter I have been following for awhile. I caught most of their great, high energy set, accented with the electronics of Shigeto in addition to Douglas, Mark Guiliana and JT Maron. Douglas is one of those artists who is always bringing new projects. He is also a pioneer in bringing his (and others') music out himself, starting the Greenleaf Records label years ago, serving his diverse and creative approach to his music and providing a similar creative space for other artists. Here's hoping that he brings another project to XRIJF soon (this was his first time here).

Ran over to the Xerox Auditorium for Stanley Clarke Band. I've missed Clarke when he's been to previous XRIJFs, so didn't want to lose this opportunity to hear him play. The auditorium quickly filled to near capacity, which is saying a lot as it sits close to 700 I think. Clark had 3 young band mates, all 20 or younger. The band started out with an early Return to Forever tune, which Clarke noted was written before his band members' fathers were born. The drummer was on fire and his pianist/keyboard play, just 19, was ripping off amazing solos throughout. There was an air of sheer joy as they played together and it was infectious.

After a break with some pizza, I ended the night with Ali Jackson Trio at Max, the drummer for the Jazz at Lincoln Center Jazz Orchestra. I'd been hearing good things about the first set on the street and decided to stick around despite an intense desire to head home and get some sleep. Jackson's set was mellow and standard-filled, a counterpoint to the rest of my night. However, despite the standards, Jackson and his band mates did not play them straight, but brought idiosyncratic shifts and flavors to them.