About Contact Us Join Our Email List ROC Jazz Artists Info for Musicians & Venues Livestreams
A blistering first night of jazz at XRIJF ...
A light night for me on Day 3 of XRIJF, but not light on music 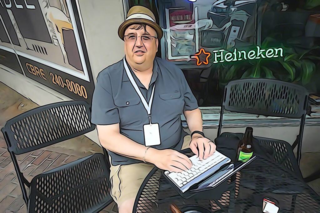 As the third day of the XRIJF begins, it looks like the rain has passed and we'll be clear and comfortable tonight. I'm taking it easy. While there's a lot of great music out tonight, I need to limit the walking and standing in line to see if I can keep this blister on my foot from developing into something really cramps my (somewhat questionable) style. Starting at my favorite spot on East ... Havana Moe's for a cigar and some good conversation with my friends. Some music coming out of Stromboli's across the street (another venue that is not IN the XRIJF, but is filling the street with music.

Day 2 was another great night of music. Dontae Winslow was a great time, the man is so full of that spirit of a man who seems to be right where he wants to be right now. The set ran from Charlie Parker to one of Winslow's about growing up in a city (his was Baltimore). I then caught some of The Splendor at the Lutheran Church. The band includes one of the members of midaircondo, which appeared here in 2007 with their effects driven improvisation. She (I won't attempt played more reeds this time, but there was a whiff of midaircondo in the air. On to the Eric Revis Trio. Although not for everyone, I really dug Revis's aggressive attack on bass and his band of pianist Kris Davis and drummer Gerald Cleaver was killing.

The image of me at "work" was taken and "retouched" by Studio Michaelino.