About Contact Us Join Our Email List ROC Jazz Artists Info for Musicians & Venues Livestreams
From Kurt Rosenwinkel's guitar to feeling the air pulse from Ikebe Shakedown's base, Day 8 of XRIJF was a study in contrasts ....
Back to your regular programming ... live jazz throughout the year in ROC (July 2-8) 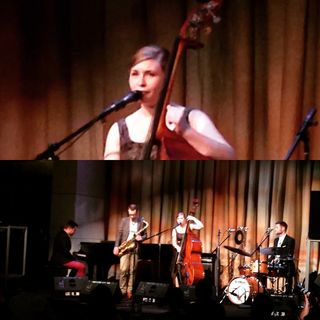 Can't believe it! Nine days have already passed. Like almost every other of the nine days of the Rochester International Jazz Festival provided me both new sounds and great experiences

I started out at Montage with the Renee Rosnes Quartet. The Montage is often the venue I finish the jazz festival at, as it often has some of the high energy acts that I sometimes want to close out the festival.  I wanted to hear Renee Rosnes and the early show fit my schedule.  Renee brought a stellar quartet with her, including bassist Peter Washington and saxophonist Jimmy Greene, and drummer Lewis Nash. The set highlighted all of their talents and was a great start to the last night.

After a break, I headed into Christ Church to hear Go Go Penguin. This young band from Manchester, UK, which just finished recording an album for Blue Note, had been promoted as one of the festival's "sleepers" by XRIJF producer John Nugent as early as the March announcement of the lineup.  Nugent wasn't wrong. Drawing from bands like E.S.T. and the Bad Plus, this young UK band's talent was evident from the first song they played at the second set (their second in the US...). Unfortunately (for me), their CDs were sold out when I walked out.

I finished up this year's XRIJF at Max with a friend, Katie Ernst, an Eastman School of Music grad who after graduating returned to Chicago area and has been active in its jazz scene (saw her there a couple of years ago when I was there for my 30th college reunion). This young bassist and singer brought her "Little Words' project to the XRIJF this year. With "Little Words," Ernst put the poetry of Dorothy Parker to music. She was joined by her band with tenor saxophonist Dustin Laurenzi, pianist Stuart Mindeman, and drummer Andrew Green. Words run through the band as they played some of Minderman's music based on poems by Langston Hughes.

I'll try to write some kind of a wrap up post a little later after I have a chance to digest this year's XRIJF.