About Contact Us ROC Jazz Artist Sites Info for Musicians & Venues JazzRochester Merch
As we slide toward the jazz festival, there is still ... live jazz in Rochester, NY, June 2-8
There is very little ... jazz in ROC (this week), June 9-15

Paul Smoker: "In his playing there was a fierce beauty, and in his person a helpful, generous guy"

Having heard Paul Smoker play a number of times since moving to Rochester, I knew the intensity and beauty of his playing and compositions. I felt that his recent passing on May 14th should be noted here in these pages, but I didn't know Paul and there had been some thoughtful pieces on Paul and his music by Jeff Spevak in the D&C and Ron Netsky in City and didn’t feel I had anything more to contribute myself. But Tim Sullivan, Professor Emeritus in the Music Department, who did know Paul, responded to my call out to my email list of local musicians about writing a guest post. Tim's guest post is below: 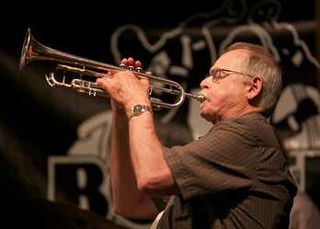 “A musician is one who travels with $5000 worth of equipment in a $500 car, 100 miles for 50 bucks.” That aging quip is one that many musicians and their spouses know, one to which they respond with grins and grimaces. Paul Smoker was known as a tough traveler, and as a strong player. Those aspects of his presence traveled quickly to our town when he moved here from Cedar Rapids, Iowa, largely to be closer to two members of his band who, by 1990, lived in New York.

What traveled more slowly was a certain deep beauty of his playing and person. Paul and his pianist wife Beverly decided that they would move to the place that provided work for one of them, and that place was Rochester, and that person was Beverly, who became the chief professor of piano at the Music Department of Nazareth College. Paul’s drive to play necessarily directed his energies toward “the city” and as the faculty of the college came to hear the reach of his musical thought we were glad to have him in town, when we could.

It was, I think, during the third year of the Smoker’s life here, the Spring semester of 1992, when an opening of particular beauty appeared: the college big band needed brass players and Paul was asked to identify trumpet students who might play. At the end of a phone conversation he said “well, of course, I could play….” And, when word got out that Paul would be in the band, players emerged from goodness knows where in a sort of re-enactment of the miracle of the loaves and fishes. That semester the band wailed, the band was fun, and Paul, I think relaxing in an environment where his fierce new music drive would not be under scrutiny--after all, one thinks of the Biblical question “What … could come out of Nazareth…?” (paraphrased here)--played for us from his gorgeous cornucopia of the knowledge of bebop. It was bebop superb, bebop beautiful, bebop flowing, bebop nourishing the band. And he was IN the band, swinging, inspiring, and illuminating all.

Around then one discovered a further virtue of the man, his generosity. If one wondered, as I would, about a particular piece of new-music by a composer such as Karlheinz Stockhausen, a cassette of the work would soon appear on one’s desk. (Yes, a cassette, this was during the last millennium … later, CDs, of course). That generosity, an inclusive one, flourished when Paul became the director of the jazz ensemble at Nazareth, as he wrote parts to fit kids into the band. Generous and provident he was.

Yes, effectively and rather famously, he presented the tough guy face. But a lot of us knew better. In his playing there was a fierce beauty, and in his person a helpful, generous guy.

Please feel free to add your own thoughts about Paul Smoker and his music in the Comments.