About Contact Us Join Our Email List ROC Jazz Artists Info for Musicians & Venues Livestreams
XRIJF in a nutshell ... Day 6 of the festival
A nice jazz sandwich ... Day 8 of the XRIJF

Lousy with Eastman grads, in a good way ... Day 7 at the Xerox Rochester International Jazz Festival

I write this on the penultimate day of this year's jazz fest.  How did that happen?  It's all a blur to those of us who "live" down on and around Jazz Street during its nine days.  As you can see by reading the below, I've heard a lot of great music this year.  Keeping to my "draft plan," Day 7 was no different, although it was lousy with Eastman grads... in a good way. 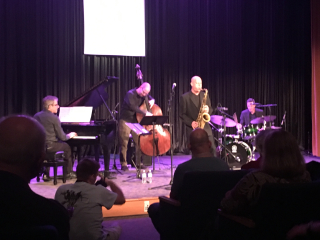 Started out with Walt Weiskopf Quartet at the Xerox Auditorium. This was a straightahead quartet, which was just what I needed to ease into the evening. Weiskopf and his quartet played a set of his originals and some standards from slow ballads to burners. He is an Eastman graduate and has taught there too. As this post's title implies, there are a lot of current and former Eastman students playing in this year's festival. 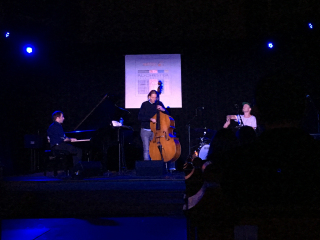 Highlight of the evening was the UK band Phronesis at the Christ Church.  This was their third year at the jazz festival and the third time I have heard them. Double bassist Jasper Høiby held down a driving, insistent groove that was forward throughout the performance, with pianist Ivo Neame filling in with intricate and at times beautiful lines, and capped off by the frenetic, inventive and always spot on drumming of Anton Eger.  The jazz chops of each of these guys is without question. As Daniel Kushner put it in a round up of last night in City Newspaper, it was "sophisticated jazz that never sounded overwrought, but struck the perfect balance between conventional and cutting-edge." 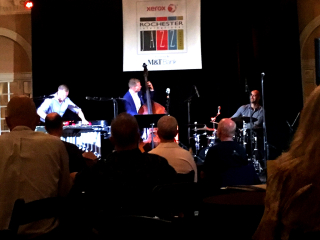 Finished up Day 7 with the Wee Trio at The Wilder Room.  Again with the Eastman grads, this time nearly a whole band of 'em!  The Wee Trio is James Westfall on vibes plus two Eastman alumni: Dan Loomis on bass, and Jared Schonig on drums. Years ago, Jared was the drummer with my buddies in Paradigm Shift.  At the late set the Trio was joined by another Eastman grad, Mike Cottone on trumpet for the last half of the set. A vibe trio is interesting right off the bat, with it providing such a rich palette for improvising and comping while others play. The trio mostly played originals and they even threw in an early David Bowie tune off Hunky Dory, Queen Bitch.