About Contact Us Join Our Email List ROC Jazz Artists Info for Musicians & Venues Livestreams
As the XRIJF winds down ... the live jazz in ROC continues, June 29-July 5
XRIJF in a nutshell ... Day 6 of the festival

A challenging night ... Day 5 of the XRIJF 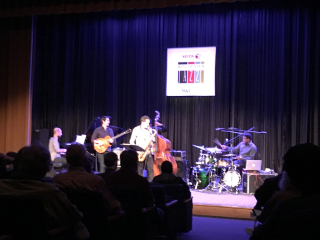 The first challenge of Day Five of the Rochester International Jazz Festival came at the first set of Kendrick Scott Oracle in Xerox Auditorium, one of my Picks this year.  Amidst the great music from Scott's new CD was a challenge to think (and talk) about race, racial injustice and the mass incarceration of African-American men. Scott made a powerful statement by mixing an expressive drum solo with tape of President Obama speaking on race and being a black man in America, and of the sound from the Facebook Live video of the stop and shooting of Philando Castile by a police officer outside of St. Paul, Minnesota, made by Castile's girlfriend Diamond Reynolds.  In a different challenge, Scott also announced from the stage the death yesterday of jazz pianist Geri Allen, a consummate musician and old soul, who played at the festival in 2007 (I did a podcast interview of Allen that year). He remembered playing at Carnegie Hall early in his career with Allen, Ron Carter and others and Allen's generosity of spirit.

Keeping to my "draft plan," which hadn't let me down yet, I made a challenging quick walk (for my knees) from Xerox to the Anthology venue for Charlie Hunter Trio. I've heard Hunter several times in the past, but like Bill Frisell he always brings something different every time, and I can't get over his guitar work, playing bass, rhythm and bass on his custom 8-string. I got there too late to get close enough to take a pic without getting in people's way, but luckily some of my "jazz fest friends" were in the same boat, so we sat in back of the bar area and tried to hear, gave up and caught up.  A challenge with a silver lining. 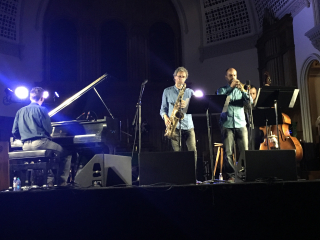 Clearly the most challenging music played at XRIJF this year so far was my last stop on Day 5, Ole Mathisen's Floating Points at the Lutheran Church. As I've noted in the past, I make an effort to expand my ears at XRIJF (and in general throughout the year).  Much of the set was the Floating Points Suite from Mathisen's new CD (which was available at the set on a wristband USB drive). Daniel Kushner described it better than I could in City, writing:

The performance of the "Floating Points" suite was the Jazz Fest at its most esoteric: Mathisen and trumpeter Amir ElSaffar intoned meditative drones that explored microbial harmonies; meandering lines were delivered like non-sequiturs; abstract interjections fluttered and spasmed, wailed and shrieked. This was jazz deconstructed, dissected even; all the bones were there, but the remains told a more abstract, disjointed yet compelling story.

While not for the uninitiated to the more "out" forms of jazz, when presented with compositions like this I listen for the structure that is always there, even when the music sounds chaotic and, at times, atonal.  It can be oddly satisfying.