About Contact Us Join Our Email List ROC Jazz Artists Info for Musicians & Venues Livestreams
So far the draft plan has held ... Day 3 at the XRIJF
As the XRIJF winds down ... the live jazz in ROC continues, June 29-July 5

Was wowed, got Mooged by a Finn and heard some of that sweet home Chicago at Day 5 of XRIJF 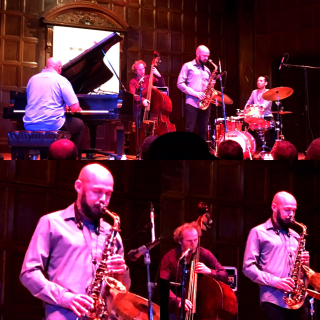 My fourth night at the Xerox Rochester International Jazz Festival started out in Kilbourn Hall with Miguel Zenon's Tipico, one of my picks this year.  Zenon and his excellent band of Luis Perdomo, Hans Glawischnig on bass and Henry Cole on drums, started out strong and didn't break their stride until the last note.  It was all about the music and such music!  I'm sure that some who came to last night's performances were expecting a night of Latin jazz (and the music playing before the show didn't belie that conclusion). What they heard was some of the best jazz compositions out there, with only the title track of his new project Tipico clearly showing the roots of his Puerto Rican background (although you heard bits and pieces throughout).  Walked out of that 6:00 pm concert with one word ... Wow! 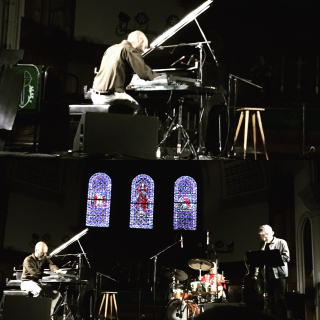 Ever been Mooged by a Finn?  After a beautiful short piece from his new CD that was both classical and showed his chops on the keyboard, Finn Kari Ikonen turned to his Moog, bringing out those otherworldly sounds in a way that showed how the Moog synth can be played as an interactive instrument, rather than the background to a sci-fi soundtrack.  Alternating with the piano, Iknonen and his band mates wove intricate tapestries of sound.  The set was pure Nordic Jazz Now, inventive and a little out at times, but accessible enough that most of the audience sat transfixed through the whole set. At the beginning of the set, Ikonen noted that he hired Ole Mathiesen because he thought he played bass clarinet... he doesn't. But he's a fine saxophonist who studied (and on my draft plan for tomorrow with his band Floating Points). 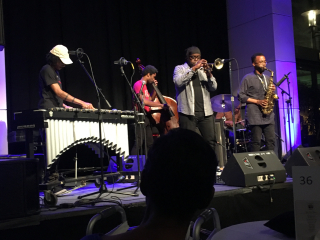 My draft plan had a choice for the third show of the night, Jae Sinette's Zero to 60 or the Marquis Hill Blacktet.  When I remembered that Hill is from Chicago, where I lived for 25 years, the choice was made.  This young group played a strong, muscular set. Tight and full of energy. In addition to Hill, young vibe player Justin Thomas was a standout. Mostly, though, listening to this band brought me back to the sounds of jazz in Chicago, which is a major influence on Hill, who now hails from NYC, and his latest CD The Way We Play. It's rare on a Monday night for Max to fill up at the 10pm show, but it filled and stayed filled until the band played their last note.

Ron Netsky at hit 2 out of three of these in a nice review of last night's XRIJF in City.