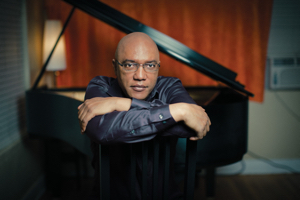 My picks for the 2017 XRIJF are not all the same as Jeff and Jack’s picks, but that should not be a surprise to those who follow my blog. I try to expand my ears at the jazz festival every year. Yes, I focus on the jazz at the festival (although I sometimes venture beyond that because I’m not just a jazz hound). I will be publishing a number of posts over the remaining days before June 23rd letting you know about my picks and setting out my “itinerary” for each day of the XRIJF. This is the first… there will be more (and I hope I get them published before the music starts).

Billy Childs has garnered thirteen Grammy nominations and four awards in his career so far. He is known as much as a contemporary classical composer as much as a jazz artists. His four Grammy awards include 2wo for Best Instrumental Composition and two for Best Arrangement Accompanying a Vocalist. As a pianist. Childs has performed with a wide variety of luminaries in both classical and jazz Yo-Yo Ma, Sting, Renee Fleming, The Los Angeles Philharmonic, The Detroit Symphony Orchestra, Chick Corea, The Kronos Quartet, Wynton Marsalis, Jack DeJohnette, Dave Holland, Ron Carter, The Ying Quartet (recently here at ESM), The American Brass Quintet, and Chris Botti. As you might expect, it is the eclectic sources of his music that draw me to pick this one as a "must hear" this year.

Billy Childs is touring his Rebirth

CD this year (affliliate link). As a recent review of Rebirth in The Guardian noted “this scintillating set is a return to the snaking quickfire hard-bop Childs played in the 70s, albeit infused with all the musics he has visited so intelligently since….” His partners on the album (and hopefully at Kilbourn) include alto saxophone player Steve Wilson, Charles Lloyd drummer Eric Harland, and vocalists Alicia Olatuja and Chilean singer Claudia Acuña.

Check it out to see if you want to add it to your Must Hear list:

Who were the other members of the quartet?

Dayna Stephens on saxophone, Ben Williams on bass, and Ari Hoenig on drums....