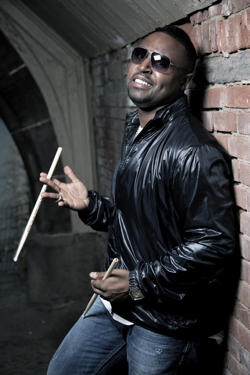 Drummer Kendrick Scott notes that the concept for his band Kendrick Scott Oracle was “conceived from the influence of jazz master drummer, Art Blakey and the movie The Matrix” where the main character, Neo, would visit The Oracle for counsel and would challenge reality by questioning the concepts and being she presented by asking questions to help him discover the answers within himself. He notes that Art Blakey’s Jazz Messengers made music to reach people by challenging the audience’s concept of music. Scott connected with this concept of communicating a message of truth to the listener through questioning the status quo. One thing that draws me to new artists are the questions he or she asks of jazz and its traditions. Listening to his 2015 Blue Note Release We Are the Drum (affiliate link), I found him exploring those questions as Scott and the band engage in a broad spectrum of high-energy sounds. Even with a name like that, this was not drum-centric album but explored the talents of all of the young artists he works with, showing another quality recognized in the music of the Kendrick Scott. As noted in 2015 by trumpeter and bandleader Terence Blanchard of his longtime drummer on the release of this Blue Note record, “Kendrick Scott has become the Art Blakey, Elvin Jones, and Tony Williams of his generation … He’s a brilliant mind bringing innovation to the music at the same time as creating a safe place for young talent to develop and grow.”

This appears to be the first time for Kendrick Scott Oracle at XRIJF. The band features Joe Sanders on bass, John Ellis on reeds, Taylor Eigsti on piano (who has been and Mike Moreno on guitar.