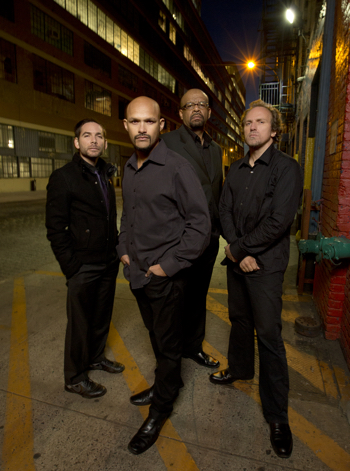 I think it was the 2008 jazz festival that turned me on to Miguel Zenón. His was one of quite a few CDs I bought that year either at the fest or shortly after. What drew me is in that he has cut a “unique path for himself as an interpreter of the music of his native Puerto Rico through the lens of cutting-edge, acoustic jazz,” as Felix Contreras wrote a recent review on NPR. His music for me epitomizes the fusion that happens in jazz as players bring their cultural heritage to bear on the tradition. It’s result is new sounds that bring you to the same place as the “old” ones do. In addition to several Grammy nominations, Zenón has a MacArthur “genius grant,” a Guggenheim, and widespread critical acclaim. He has a broad and diverse experience as a sideman and collaborator, working with older jazz masters and with the music’s younger innovators, including; Charlie Haden, Fred Hersch, Kenny Werner, David Sanchez, Danilo Perez, The Village Vanguard Orchestra, Guillermo Klein & Los Guachos, The Jeff Ballard Trio, Antonio Sanchez, David Gilmore, Paoli Mejias, Brian Lynch, Jason Lindner, Miles Okazaki, Ray Barreto, The Mingus Big Band, Bobby Hutcherson and Steve Coleman. Zenón is also a founding member of the SFJAZZ Collective, a group whose past and current members include Bobby Hutcherson, Joe Lovano, Joshua Redman, Brian Blade, Nicholas Payton, Dave Douglas, and Eric Harland, including serving as a resident artistic director for the Collective in 2012.

This year, Zenón is bringing his Tipicó project (Miel Music, 2017) (affiliate link) to XRIJF, his 10th album as a saxophonist and leader. The new CD celebrates the Miguel Zenón Quartet, his working band of more than 15 years, including Venezuelan pianist Luis Perdomo, Austrian bassist Hans Glawischnig and fellow Puerto Rican drummer Henry Cole (an international jazz festival on one stage, which is not uncommon at XRIJF). The cuts on the CD were each specifically written for the members of the Quartet and directly inspired by their individual playing and personalities, documenting their chemistry and collective musicianship. While the cuts on it have echoes of Zenón’s Puerto Rican roots, it is not looking back, but looking forward with a hard edge and beautiful playing throughout by all of this consummate band.

I am also a fan. He is the most groundbreaking and influential saxophonists of his generation. I love his music.