About Contact Us Join Our Email List ROC Jazz Artists Info for Musicians & Venues Livestreams
XRIJF 2017 Picks: Bill Frisell & Thomas Morgan, Kilbourn Hall, Sunday, June 25th, 6:00 & 9:00 pm
XRIJF 2017: A chance to hear the music you can hear the other 356 days of the year… 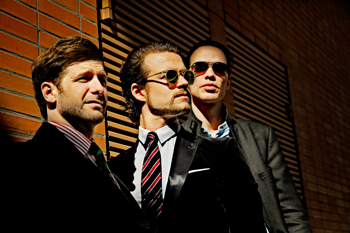 Phronesis has appeared at the Made in the UK series of the Rochester International Jazz Festival twice before (2011 and 2013). Discovering this band in these earlier appearances, I am looking forward to hearing how they’ve evolved in the ensuing years. Their most recent CD Parallax (affiliate link) brought me back to why I found them compelling in their earlier appearances.  A 2017 recording The Behemoth (affiliate link), which they collaborateed with sax player, bandleader, arranger and conductor Julian Argüelles and the Frankfurt Radio Big Band, put a new cast on their music as a trio that brought to mind the lush compositions of Maria Schneider.  Unfortunately, it’s too expensive to bring a big band on a U.S. tour, but what I heard in Parallax reminds me of why I bought their CD after hearing them in 2011. As described in Downbeat in 2016 about Parallax, "[i]magine if Chick Corea and Stanley Clarke convened a modern edition of Return to Forever that opted for acoustic instrumentation instead of electric, while retaining the high-velocity improvisational jousting and flair. Such impressions casually make their way onto Parallax, the sterling new disc from the Danish/British jazz trio Phronesis.”