About Contact Us Join Our Email List ROC Jazz Artists Info for Musicians & Venues Livestreams
A challenging night ... Day 5 of the XRIJF
Lousy with Eastman grads, in a good way ... Day 7 at the Xerox Rochester International Jazz Festival

XRIJF in a nutshell ... Day 6 of the festival

Day 6 of the Rochester International Jazz Festival was one of those nights that epitomizes the festival: Great music, but each uniquely different. Just the way I like it. I flipped my schedule after remembering, well after 4:15, that I needed to get a wristband for the first set at Max on my "draft plan." But given the rest of the schedule I just replaced the first with the third and it worked just as well. 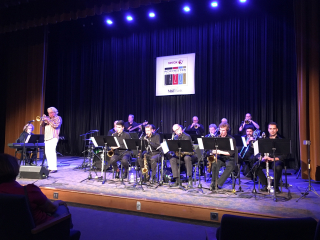 Started out the evening at the Xerox Auditorium with the Charles Pillow Large Ensemble featuring trumpeters Tim Hagans & Clay Jenkins.  Usually I would pass on something like this because there are opportunities to catch Pillow, a professor of saxophone in the Jazz Studies program at the Eastman School of Music, with a large ensemble throughout the year.  However, this time it was different. Pillow, his featured trumpeters, and a large 16-piece ensemble of top national players, Eastman grads and students were playing music from Pillow's new project, "Electric Miles." The first set included arrangements of classic Miles Davis music from his first iconoclastic "electric" period. The first included great arrangements of tracks from Bitches Brew, In a Silent Way and On the Corner. 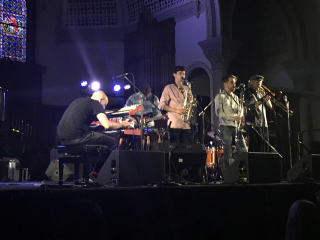 Next stop was the Lutheran Church for Klabbes Bank.  This sextet of Swedes created a wall of sound during their first set, anthemic with rhythmic intensity and a good dose of electronica thrown in. The band included keyboards, a guitar, drums, trombone and two reed players, one on sax and another who alternated between an alto sax and bass clarinet (where was he when Kari Ikonen neede him?). All but one sax player was hooked into electronics and they used them throughout the set to loop and add other effects. In an intro to one of their songs, the drummer "scratched" voices (mostly in Swedish, although I distinctly heard "we shall overcome" in there...) into a beat. As often happens with bands who are playing the festival at the Nordic Jazz Now series for the first time here, there was some earnest banter from a band member about their time in Rochester. Keyboardist and leader Klas-Henrik Hörngren told a story of his morning taking a walk from downtown ROC to the lake, probably Charlotte.  Once he got to the lake he realized how far it was back and began panicking a bit as he had to get back for the sound check. He whipped out his iPhone and fired up his Uber app only to find out that they weren't starting up here until 12:01 this morning. Hörngren went into a bar and after talking with some patrons a woman offered to drive him into town.  "People are so nice here." 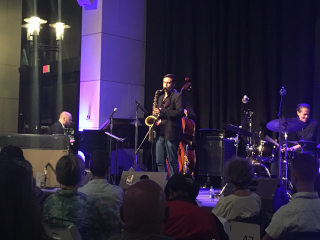 My final stop of the evening was for the Shauli Einav Quartet at Max at Eastman Place. Einav is an Eastman grad from Israel.  He and his fine quartet played mostly Einav's originals which were a mix of post bop and more introspective composed music, some of which were quite beautiful. A highlight was an arrangement of an old Israeli song that Einav was commissioned to write for the Red Sea Jazz Festival, with his pianist turning to a vintage Fender Rhodes piano, which was a perfect foil for the piece.