About Contact Us ROC Jazz Artist Sites Info for Musicians & Venues JazzRochester Merch
Lousy with Eastman grads, in a good way ... Day 7 at the Xerox Rochester International Jazz Festival
The plan is no longer "draft," but final ... Day 9 of the XRIJF 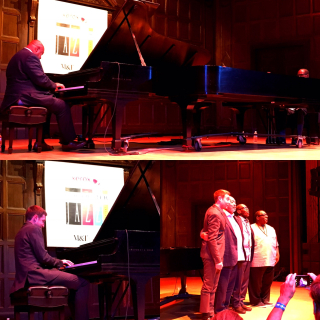 Thelonious Monk, two Steinways, Kilbourn Hall and four of the finest interpreters of his music ... how could I go wrong? Started Day 8 with 4 By Monk By 4 featuring Kenny Barron, Benny Green, George Cables and Cyrus Chestnut. The masters alternated between duo and solo piano renditions of Monk's music, including Ask Me Now, Bye-Ya, Green Chimneys, and Ruby, My Dear. The concert ended with a round robin with all four pianists tapping each other out to take over playing. 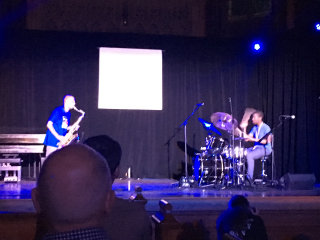 Moved on to the Christ Church to catch the duo Binker & Moses.  There was just two young UK players with a sax and drums on the stage, but they produced a sound much bigger than the sum of their parts. Given the instrumentation, there was a lot of repetition in the sax with Binker weaving lines around the drummer Moses' strong, rock-influenced beat.  I always enjoy the Made in the UK Series as they consistently bring in something different that is often very satisfying. 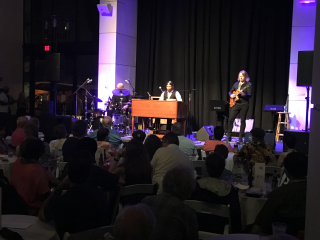 I finished the night out with the Ronnie Foster Organ Trio in Max.  As anyone who reads this blog will know, I'm a sucker for a Hammond B3 organ. Foster and his trio, who hail from Vegas, baby, did not disappoint.  He was clearly having fun and while I had to leave before the set ended, I hear that he played on until 11:20 ending with a call-and-response with the full audience that remained well pass closing time.

So I had a sandwich (no, not talking about  the street meat kind, although there was some of that, too), with two straightahead pieces of bread slapped around some meaty substance.