About Contact Us ROC Jazz Artist Sites Info for Musicians & Venues Buy a T-Shirt!
The XRIJF starts tonight and JazzRochester will be there... let the music begin!
The second night of XRIJF ... a night that almost wasn't (at least for me...), but happy it was! 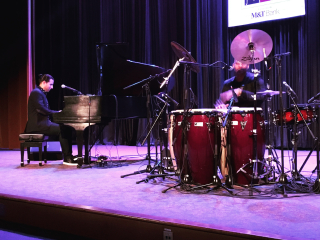 I was quite worried before the music began yesterday.  So much going on in my brain, I barely slept on Thursday night. Things started to click into place when I took a tour after emerging from the garage, poked my head into “Jazz Street” and saw the preparations and familiar faces I always see, and then I hit my “office” at Havana Moe’s on East Ave, worked on the blog and watched the crowds start to arrive.  It really clicked in when the music began.

A quick recap from last night...

So what’s on for tonight? Lemme see...

Depending on timing, weather, etc., I may trade off to see Mwenso & The Shakes or the late show of Gypsy jazz group Des Sourcils.  On the other hand, I’m finishing up this post in Van Bortel Subaru. We were out near the dealership for a graduation party and water began to pour into  the passenger side of the cabin from the dash.  So, it may be that my “grand plans” will be dashed ... with a fat repair bill to boot.