About Contact Us ROC Jazz Artist Sites Info for Musicians & Venues Buy a T-Shirt!
There is still more jazz in June (and July) than XRIJF... Live jazz in ROC outside of the festival, June 28th to July 4th
The sixth night of XRIJF lifted my soul and made me listen to my body...

And on the 5th night of XRIJF, there was a wide variety of music (go figure) 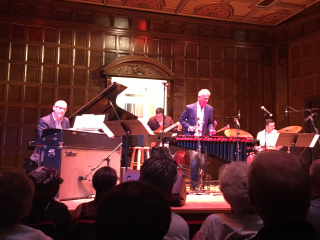 After sitting out the prior night, and still feeling a bit rough at several times throughout the night, I hit the XRIJF for the fifth night.  Last night was a good example of one thing I love about the festival... it is "and now for something completely different" every time you move from venue to venue and pass through the streets within the footprint of the festival.  Here's how it went for me:

So what's on tonight for Night 6 of the XRIJF if the rain and my health let me ... well, lemme see: