About Contact Us ROC Jazz Artist Sites Info for Musicians & Venues Buy a T-Shirt!
And on the 5th night of XRIJF, there was a wide variety of music (go figure)
Sitting out the rest of XRIJF, I'm afraid ... go fest amongst yourselves!

The sixth night of XRIJF lifted my soul and made me listen to my body... 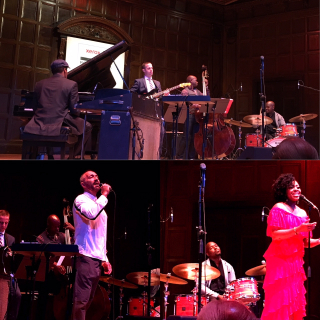 After the news of the day yesterday, with the Supreme Court issuing its last opinion curbing union rights (my parents were both teachers and I was a Teamster in an earlier life) and Justice Kennedy's decision to retire at the end of the month, I was worried about the state of our democracy. As a lawyer, what happens in the third branch of our government takes on much more significance. I was in a funk... but I started out at Kilbourn Hall with Ulysses S. Owens Jr.'s project Songs of Freedom and was reminded that music is one way to find our way through our current state of discord or, if necessary, call out what's wrong with our nation. Owens let the music speak for him... he wasn't there to harangue the audience (I'm sure some of you are just fine with the current state of the nation) but to remind them of the foundational principles of this nation and our failure to live up to them. And USO and his project delivered on the music. Songs of Freedom explored the music of the 60s through interpretations of the songs Joni Mitchelll, Abbey Lincoln and Nina Simone, imagined through the Quartet and the voices of Theo Bleckmann and Alicia Olatuja.  It was an abbreviated version of the 80 minute project that Owens was commissioned to create for Jazz at Lincoln Center.  Bleckmann and Olatuja were amazing.  Yes, I'm showing my politics on my sleeve, but the music was incomparable and it was very needed at this place and time.

As I noted on Twitter and elsewhere, I next "called an audible," literally, and went to hear Torben Waldorff at the Lutheran Church.  After Songs of Freedom, I couldn't top the vocals there despite hearing so many good things about Jazzmeia Horn.  This was Waldorff's third time at XRIJF. He was joined by Jon Cowherd (piano), Jon Wikan (drums) and the great Drew Gress (bass).  The quartet glided through a number of cuts from Waldorff's new CD and some of his other compositions.

Ended the night with the Julian Siegel Quartet at the Made In the UK Jazz series at Christ Church.  While a number of the acts in this series are new, young artists rising in the British jazz scene, Siegel has been around and his Quartet has been playing together for a decade.  It showed.  I had heard that one unique thing about Siegel was that he plays the bass clarinet.  I wanted to hear that sound in this format and lcoation.  Fortunately, he finally picked it up from its perch for the last song of the night.  I enjoyed the journey to get to that as well.

I'm not adding any picks for tonight as this is being published well after it would get out to potential readers.  Why? I'm sitting out tonight.  Last night was a bit rough, but I hung in there and made it most of the way through.  Today, I'm listening to my body, which is yelling at me that something is wrong and I need to figure out why.  I may or may not see you on Jazz Street for the rest of the festival. Go fest amongst yourselves!  I'll at least be watching online....