About Contact Us ROC Jazz Artist Sites Info for Musicians & Venues Buy a T-Shirt!
The sixth night of XRIJF lifted my soul and made me listen to my body...
No fireworks for me, gotta write the post letting you know about ... Live jazz in ROC from July 5th through July 11th

Sitting out the rest of XRIJF, I'm afraid ... go fest amongst yourselves! 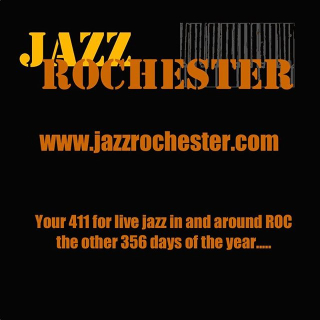 Remember what I wrote about "grand plans" a couple days before XRIJF 2018 began?  All of those plans were founded on actually being at the festival.  I've had to sit out a couple nights already and, listening to my body and my doctor, I'm not planning on coming back tonight and tomorrow. While I'm sure that there are folks who are dealing with much more than I who are braving it, I don't know yet what it is so have decided not to try my luck (especially with the heat....). If you've been following my posts during this year's XRIJF, you know I've been hearing some great music on the five days I was able to make it. So please go out there enjoy yourselves during the final days of the festival!  And drink lots of water!

Here's what I was planning on catching tonight & tomorrow:

I'll see you on Jazz Street next year and, I hope, more of you at live jazz gigs through the other 356 days of the year!