The 2019 RIJF ends tomorrow ... whew, I made it! Here's where JazzRochester's ears were last night

In my experience at the Rochester International Jazz Festival, the penultimate night is usually a subdued night for me. It may be intentional programming or it may just be exhaustion setting in, but while I heard some good music on the eighth night of the RIJF, the last show I really wanted to see was last night's last show. Compared to Thursday, the crowds were a lot smaller in the Club Pass venues, which may be correlated with avoidance of the crowds coming in for the free shows (I notice this every year, but this year it was more pronounced in my opinion).  Here's what JazzRochester's ears found to listen to last night.... 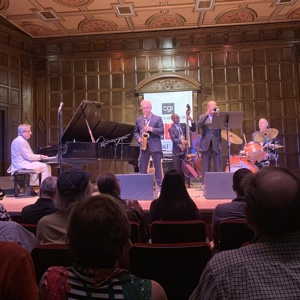 Started out with Jubilation! Celebrating Cannonball Adderley in Kilbourn Hall.  An all-star quintet fronted by alto saxophonist Jim Snidero and trumpeter Eddie Henderson joined by Joe Farnsworth on drums, Nat Reeves on bass and Peter Zak on piano bounced through interpretations of well-known Cannonball Adderley songs like "Jeanine" and "Work Song", but also included some of Snidero's own music. It was a bouncy, fun hour of bop played by great musicians. 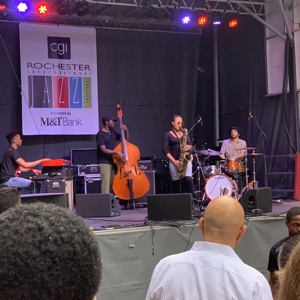 I got some grub and hung out around Jazz Street for awhile, catching a good part of the first set by Brit Nubya Garcia on the Jazz Street Stage.  She's part of a diverse and growing London jazz scene (notice how many Brits were found in all of the Club Pass venues ... correlation?). The performers on this free stage tend to be more on the rock or funk side, but Garcia and her band, while bringing on the funk and hip hop grooves, were also slinging jazz our way, some of it on the out side.  It was not necessarily the cup o' tea of some of those who pitch their campsites in front of the Jazz Street stage, but there were a number of younger cats on the perimeter who were really getting into it. 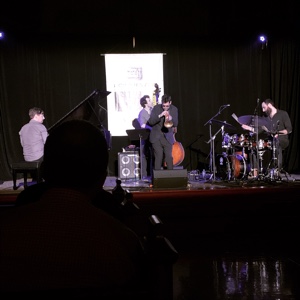 Next stop was Christ Church for Israeli-born, Brooklyn-based trumpeter Itamar Borochov.  Borochov’s music is plying the connections between the musics and cultures of North Africa, modern Israel, ancient Bukhara (a city in Uzbekistan in the ancient Silk Road), mixing in some East Village and Brooklyn, melding them into jazz that sounded both foreign and familiar. 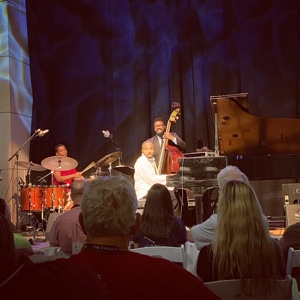 Finally, I arrived at Max of Eastman Place atrium for what for me was the last "must see" for this year's RIJF, Sullivan Fortner Trio. I had heard the New Orleans native Fortner play as a sideman in several bands, including Roy Hargrove's, and in a duo album with vocalist Cecile McLorin Savant's, and wanted to hear him as a leader. He was joined last night with the great Dezron Douglas on bass and Joe Dyson on drums.  The trio's set started out quiet and introspective,  at times somber set as Fortner remembered the many artists in his life who have passed in the last few years (including Hargrove). Just as I had put out some posts to Instagram and Twitter to that effect, a switch went and the trio was off to the races for the last few songs of the night. Fortner is an amazing pianist who makes it look too easy and would look off (I want to say "wistfully") into the audience and look like he was following an attractive girl walking across the back of the venue (I glanced around ... he wasn't) with a slight smile on his face. Meanwhile his fingers are all over the piano. He also was quite funny, bantering with the audience throughout the performance.  After the introduction was made (including the obligatory fire exit announcement), Fortner said “part of jazz is knowing where the exita are...” (I've heard jazz musicians say similar things, as you need to know how you're going to get out of a solo).