About Contact Us Join Our Email List ROC Jazz Artists Info for Musicians & Venues Livestreams
Where are JazzRochester's ears going to be during the 2019 Rochester International Jazz Festival?
Eight for eight so far... another diverse journey for JazzRochester's ears on the 2d night of the RIJF 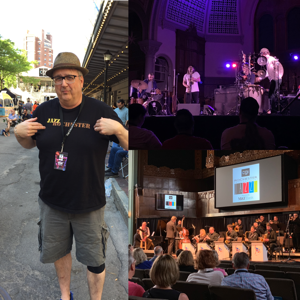 My first night at the 2019 CGI Rochester International Jazz Festival was a great way to start the festival.  Watching people trickle in at the beginning from my "office" (Havana Moe's on East) and then following my eclectic path through the evening, I came out the other end tired and happy.  It's great seeing the city appear to wake up to welcome summer and get fully into festival mode after what was a long winter and wet spring.  The ugly mug on the left (me) is sporting the prototype of a JazzRochester t-shirt I've been toying with making. Unfortunately, it is the only one for now and I can't wear it every day (you who may be sitting next to me at a future Club Pass  venue might agree).  I'll have to get on finishing the design and making up some for myself and others for next year....

I managed to get my ears into four Club Pass venues for all four of the shows I set out to hear, which were distinctly different concerts.  Highlights of the night were:

I expect tonight's itinerary will be just as diverse, music-wise: