About Contact Us Join Our Email List ROC Jazz Artists Info for Musicians & Venues Livestreams
Let the other 356 days of the year begin! ... Live jazz in Rochester, July 4-10
Heat getting to you? Cool down with some ... Live jazz in ROC, July 11-17

JazzRochester's ears had a great time at the 2019 Rochester International Jazz Festival ... Some final thoughts 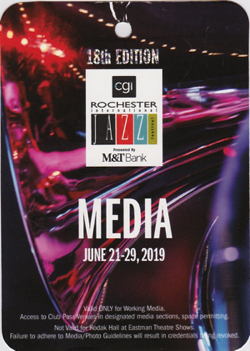 After a bit of rest and reflection, I thought I'd add some thoughts about the 2019 Rochester International Jazz Festival. Just a few bullets with my reflections.  I encourage you to use the comments to add your thoughts as well.  Overall, I had a great RIJF. I heard a lot of music and managed to hear something at almost all of the stages, except for Geva's smaller stage and the RG&E/Avangrid stage (although I heard some of the latter as I passed by a few times). There was a great diversity of music for available to choose from and in my conversations with folks near me in line or at a venue it seemed like most were also really enjoying their festival.  While I try to cover the festival for JazzRochester, my focus is on hearing as much jazz as possible. Here's my more specific thoughts:

Next year's festival runs from June 19th through June 27th. While festival Music Director John Nugent and Producer Marc Iacona seem to be dialing it in, hitting last year's 200,000+ festivalgoers.  Hope to see you on Jazz Street next year!

Buskers should be registered. Nothing is free. I understand that for the most part they are looking to pocket a few $$$ from festival goers swept up in the moment but if allowed they should have to follow certain criteria/conditions. IE; no power generators to supply electrical needs, cant exceed certain decibel levels. cant cause pedestrian traffic snarls.
The drummer needs to move to California. He was glazed over... I think he hurt himself.

Reporting to you from the downtown office at HMs...and thats the way it is July 7th 2019.