About Contact Us ROC Jazz Artist Sites Info for Musicians & Venues Buy a T-Shirt!
Join me and the other 2021 JJA Jazz Heroes today for a conversation
Not surprised, but still disappointed ... RIJF must wait another year

The live music scene all over the world changed dramatically on March 16, 2020, when all the music venues across New York suddenly closed due to the COVID-19 pandemic. Rochester’s bout with the pandemic has been brutal, but it has been especially hard on the area’s jazz musicians and venues. As gigs dried up, Rochester’s jazz musicians turned to new ways of getting their music out, focused on their teaching (although often through new media), or the day jobs they always had, and keeping themselves and their families safe. Some venues that featured jazz closed, never to return. Some new have emerged and others continued to feature live jazz as they reopened. The “new normal” will not be like the old, but perhaps we could make it better? As part of the small efforts I can contribute to rebuilding a community around live jazz in Rochester, I’m hoping to start a series of posts introducing or re-introducing the musicians and bands who perform live jazz and improvisational music in and around Rochester area. I’m starting this series with my good friend, Mel Henderson. 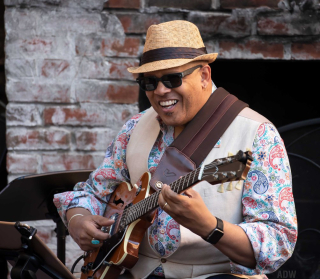 Guitarist Mel Henderson was born and raised in Rochester. Mel evolved into an internationally known jazz musician over the past three decades. He has performed and recorded with some of contemporary music’s finest musicians, including Al Jarreau, Dr. Lonnie Smith, Joe Locke, Randy Brecker, Wycliffe Gordon, Marcus Printup, JD Allen, Jeremy Pelt, Ted Poor, Jack McDuff, Tommy Campbell, Wilby Fletcher, Fred Wesley and David “Fathead” Newman. Mel has toured extensively, with the band and sitting in with other artists, throughout the U.S., Europe and Canada, performing at some of the best national and international jazz festivals including the Rochester International Jazz Festival, Salzburger Jazz-Herbst, and the Markham, Newport and Paetec Jazz Festivals, as well as at renowned venues such as the Blue Note clubs in New York and Tokyo, and the Bee Hive and the Beat Hotel in Boston. Mel is on the faculty of Rochester Contemporary School of Music and is a much sought after clinician. He currently resides in Irondequoit.

Mel’s love of music started early. Both of his parents, who moved to Rochester from Wilmington, Delaware, were musicians. On scholarship, Mel’s mother attended Eastman School of Music in 1950s, one of the first African-American opera students at that school. His father played in neighborhood bands with famed jazz trumpeter Clifford Brown. There was always music in the Henderson home ... particularly jazz. Mel notes his “first Instrument was the accordion!” While playing the accordion, he met his bandmate, organist Gerry Youngman (who also plays a mean trumpet). Eventually, “after listening to George Benson and Wes Montgomery, as well as James Brown, the Temptations, Ray Charles and even the Beatles (smile), I persuaded my parents to let me switch to guitar.” At his parents insistence, Mel started studying classical guitar (“I wanted to play what I heard on the radio, LOL!”) at the Hochstein School of Music when it was located on Hoeltzer Street in Rochester’s Upper Falls, then later he started studying with Dick Longale, and later and most notably studying with Doc Severinson guitarist Tom Rizzo at the short lived Barley School of Music. In the 1970s, Mel attended the Berklee School of Music in Boston, studying with Gary Burton and guitarist Mick Goodrick. For Mel, it has been “not so much schooling for jazz, as it is a calling…. All musicians more or less learn the same things ( or should)—it’s just what genre of music you apply it to.” Although I knew the answer before I asked, Mel told me he listens to a lot of different folks, from J.D. Allen and Keith Jarrett, to The Meters and El Debarge. He is a man after my own heart that way, listening widely and stretching his ears into new things. 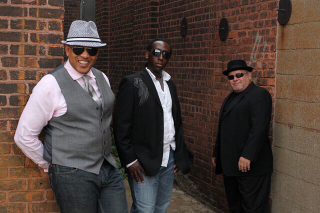 Mel is a member of the group Paradigm Shift with his buddy of over 40 years, organist Gerry Youngman and drummer Sean Jefferson. In 2004, the band recorded the Grammy-nominated album Shifting Times (Apple Music link) on the German-based label Nagel-Heyer records, which featured Wycliffe Gordon, Marcus Printup and Joe Locke. Their latest recording was the 2007 disc Street Expressionism (Apple Music link), also on Nagel-Heyer, featuring Gordon and Printup, and Gray Mayfield. Paradigm Shift is currently completing its next project, which is being produced by SouLive co-founder and drummer Alan Evans.

Mel has been playing jazz in Rochester for a long time, and putting on many different hats (you know Mel has a lot of them!) in the local jazz scene, even owning and operating the jazz club Indigos in the mid-1980s. Mel thinks that the Rochester International Jazz Festival has caused a jazz renaissance of sorts (at least before the pandemic), not only in Rochester but also in the region, as many clubs and restaurants have been trying to include jazz and improvisational music in their entertainment line up. While Mel and the band have not done much streaming, he sees the online presence as huge and a developing area where all musicians are trying to find their way to have a presence, pandemic or not.

There has not been a lot of gigging around the Rochester area after the pandemic shut things down over a year ago, although now some gigs with the band and in small duos are starting to pop up now. Paradigm Shift’s next performance will be this Wednesday at the Penthouse at One East Avenue’s Wine Down Wednesday. As of this posting, there are still tickets so come out if you’re ready (I'm finally getting out myself...).