We've been on Twitter for a long time at Jazz@Rochester, with over 5,800 followers (more every day), and following local jazz artists, jazz artists from elsewhere with a local connection and more than a few of my favorite artists, websites, blogs and other jazz information sources.

Join in the conversation with your favorite artists.  See what they're saying before and after the XRIJF. I'll be sharing, too, so just watch the Jazz@Rochester Twitter feed (if you want to check that out, click on the blue Twitter bird in the middle column. 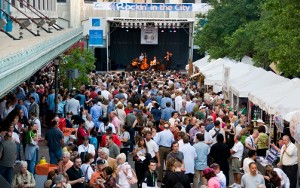 This post kicks off a number of posts that will be published over the next couple of weeks highlighting each night of the 2010 Edition of the Xerox Rochester International Jazz Festival, which is quickly approaching on June 11th to 19th.

As there is a wealth of information on the festival's own site about lineup of artists each night (as well as coverage elsewhere), I'm again going to focus these posts on the artists or groups I am planning to catch each day (partly it serves as a way for me to organize my own thoughts and schedule). Where available, I will try to provide some additional links to learn more about my picks and their music and mention some of the other available possibilities if you're finding my choices odd. During the festival itself, as I did last year, I'll add links to others who are covering it in the local mainstream media and blogger community.

Of course, as anyone who has been to the festival will confirm, you have to be flexible as you make your way through its nine days—the inevitable changes will sometimes lead to new discoveries or musical moments you will never forget. John Nugent, Music Director at XRIJF, has been using the phrase "...it's not who you know, it's who you don't know" to describe what he and fellow festival producer Marc Iacona are trying to do with XRIJF. I even bought the T-Shirt last year as I think it is a spot on description. Nugent programs in a wide variety of jazz and other music genres to draw a wider and more diverse audience. While it often leaves the "jazz police" scratching their heads as to why it is called the "Rochester International Jazz Festival," it is always an enjoyable voyage of musical discovery for me. If there was just straight ahead jazz presented, you'd have a couple of thousand people milling around for perhaps a night or two, but not 120,000+ (it will clearly top that this year) on the streets of downtown Rochester for 9 days. Some of those people who are listening to the wide variety of music will catch some of the majority of the shows that are jazz and come away with a desire to hear more. That's how you strengthen the jazz listening community throughout the year.

I have first heard scores of artists at the RIJF over the past 7 years (it had been going on several years before I arrived in Rochester), artists who I continue to listen to and who I likely would have never heard of otherwise. For people like me who hit "Jazz Street" (which Gibbs Street between East and Main is renamed each year) on all nine nights of the festival, it is a constant state of movement between venues, sometimes taking an unexpected detour to accompany friends to what they had on their list or sometimes because the line for the venue on my list is too long and I'll likely not get in. In each of these cases I often find out that it was the better choice anyway. That has happened time and time again.

The timing of the Club Pass shows allow you to hear up to 4 separate acts a night, 2-3 if you opt for one of the big shows at Eastman (or more if you go to the after hours).  What's great about XRIJF is you can come in for one, as many as you can fit, or just come down and sit in the evening air catching some of the free shows and great local talent in the outdoor venues. There will be a large number of local artists playing this year and, as every year, the very talented jazz bands from some of the areas high schools.

If you're on Twitter, you can follow my tweets during the festival (or follow me now) and add your commentary through replies. I am also trying to collect XRIJF artists who are also on Twitter into a Twitter list. Not much there now as I've got to find more artists (only one right now really is a major tweeter). As I have with past jazz festivals, I may try some moblogging (although admittedly, if I do, I have to work on the content) and other avenues of communication as well.

A number of the next posts (except for Wednesdays) will be setting out my initial stab at an itinerary through each of the nine nights of the XRIJF. Take them as you find them. I'm not a musician or an expert in jazz (although I play one on the Internet) and I like to challenge my listening by checking out some very eclectic sounds.  You may find more of that this year, as RIJF has programmed a number of artists who have been to the festival before and I'll usually opt for something new (although there are exceptions). I encourage you to add comments to the post for each night about your picks, what you think of mine, etc.  See you on Jazz Street.... 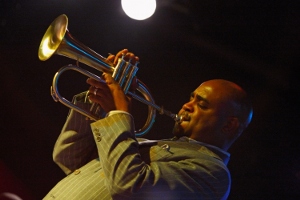 As I've noted before, I don't want to let feeding content to this blog make it impossible for me to experience the music or spend time with friends, which are the qualities that make the Xerox Rochester International Jazz Festival such a wonderful experience for me. This isn't my job. This year I am feeling it more than before, so I'm stepping back, writing less, and using Twitter and other new ways to communicate as I experience the XRIJF this year. To that end, I'm going to try something new here.  Here are some of my "tweets" off the @jazzrochester Twitter stream for Day Two with a few notes on my day at the RIJF:

Have 2 remind myself how young these guys in Terrell Stafford's Qt are...they look just out of Stridex! Don't play that way, tho. #XRIJF

Popped in 2 C a bit of SMV ... Walls of the Eastman Theater will B rumblin soon. Miller, Wooten, & Clarke (on bass clarinet @ 1st) #XRIJF

Ok, I'm sitting too far back & Mr. Clarke is bigger than I remembered. It was Marcus Miller on bass clarinet. Stanley is on standup #XRIJF

It's 10pm, & Jon Cleary just took the stage & is kickin out the N'awlins jams in high gear. Dancin in the aisles is not far behind. #XRIJF
I did other tweets yesterday, mostly "retweets" of information and links or replies to other posters. Twitter is clearly not for everyone, but there is a growing community of jazz musicians, jazz venues, and other lovers of jazz on this microblogging service and it is a great way to quickly get information out, share the experience of an event with others (potentially thousands), and even to meet some of those people in person which is why it is called "social media."  Check out the TweetFest widget here to check out or follow the conversation.  The folks at XRIJF are also on Twitter.
This post was originally published on JazzRochester.